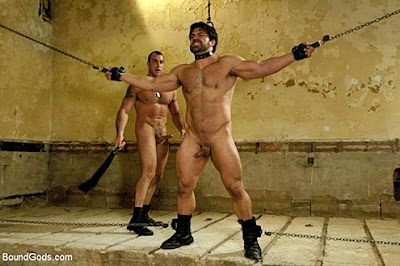 I like to get fucked. I also like to get tied up and have the shit beaten out of me. For this reason I like big men. But sometimes in Manhattan, all you find are cute-ass boys who would make better cub scouts than masters. That's why I'm a writer.
I write porno stories. It's a good way to get through a hot summer night when there's no burly number around to whip my ass raw. I strip down to nothing but my jockstrap and while I write about young studs being abused by experienced masters, I jerk my fat piece of dick until I cum all over the paper.
It's midnight and I'm too fuckin' drunk to go to the bars. I have one hand inside my jock, feeling my balls sweat and squirm. I squeeze my meat until it hurts as I begin to write:
Carl scrutinized the half-naked men as they stalked one another in the underbrush. Shadows among the trees pressed one another in the under­brush. Shadows among the trees pressed against each other hungrily; distant moans of pain bruised the otherwise soundless night. Carl shoved his hand in his pants and felt his cock pounding. He shut his eyes and sunk into half-fantasy.
Carl saw in his mind a big man: his chest was heavily-muscled and covered with coarse, dark hair. Carl could hear the husky voice talking in his head.
"How would you like to have that hot white ass of yours beat until it burns?"
Carl felt his prick ache. "No," he begged.
Suddenly, a hand slapped Carl's face, hard, and his eyes popped open. His skin burned with the sting. This wasn't a fantasy. In front of him he saw a face: a heavy beard, a moustache, deep set eyes. Carl was scared.
The man didn't raise his voice. "Say it," he ordered.
"I wanna — I wanna — "
Carl's head was swirling around dizzily. He didn't know what he wanted. But his dick did: it was hammering inside his Levis, swollen with arousal. He felt his butt twitch; involuntarily he flexed his tight cheeks as if in preparation.
"What do you want?"
"I wanna — I wanna get beat . . . sir. Beat my ass . . . sir."
The man nodded. "Follow me."

I MADE THIS BLOG FOR HOT GAY STORIES AND STUFF.... I REMEMBER WHEN I WAS IN MY TEENS AND FINDING GAY STORIES IN PLAYBOY, PENTHOUSE AND OTHER MAGAZINES. I WOULD GET TURNED ON READING THESE HOMOEROTIC STORIES. DAMN! I COULD NOT WAIT TO GET OLDER BACK THEN:P ENJOY MY BLOGS!!:)

KEL
Vancouver, British Columbia, Canada
Comments are welcome but will be screened! Don't write anything ignorant it will not be posted! There is such a thing as stupid comments also so don't leave them on here! This is a place to enjoy! I put my own time into this site and don't get paid so please respect it and the men! If something offends you, please leave! Thanks and enjoy!

LINK TO MY OTHER BLOG